What Types of Bats Enter a Home? 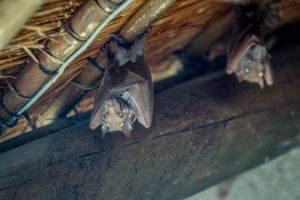 It can be a scary and unwelcome experience as a homeowner to stumble across a bat who has taken up shop in your home. While it may be difficult to tell the difference between types of bats from a pure eye test, there are actually many differences between the types of bats which sneak their way into homes.

In fact, there is a big difference in the type of bat you may find in your home based on the season. During the summer, if a bat is discovered inside a home, it is likely to be a young bat which simply got lost and trapped within the home. Baby bats are born in May or June, and as they seek out food at night and roam around, they will come across many unfamiliar areas such as human homes. These baby bats may squeeze into an opening in a home and could get trapped inside the residence as they don’t know how to get out of the situation.

On the other hand, a different type of bat is found in homes during the winter. There are many different species of bats found in the Maryland area, with one type being the Big Brown Bat. Since most, if not all, bats hibernate during the winter months, the chances of coming across a bat invasion during the cold months are low, but if a bat does happen to enter a home between October and April, it is almost certainly a Big Brown Bat.

The reason why Big Brown Bats are far more likely to be found in homes than other species is because they are one of the only species able to survive winter inside a warm, heated home. While bats seek to escape from the harsh winter weather, most will hibernate in similar areas to where they live year-round, such as caves or mines. The Big Brown Bat is an especially hearty bat, which gives it the ability to leave hibernation earlier and seek out food, but if temperatures turn cold again, they will be scrambling for warmth once again. Even though they have enough natural protection to survive outside, Big Brown Bats will seek a nicer, easier style of living and end up in many homes as a result.

If you think you have a bat problem on your property, call the experts at Shumaker Animal Control to deal with the problem for you. Our experienced team will take care of the problem in a timely manner, ensuring that you, your home and pets are not in any danger.

Tweet
Share
Pin3
Share1
4 Shares
Categories: Bats
This entry was posted on Tuesday, February 26th, 2019 at 9:31 pm . You can follow any responses to this entry through the RSS 2.0 feed. Both comments and pings are currently closed.