Red Fox Denning Season: What You Need to Know 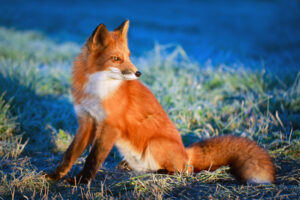 Even though the red foxes’ mating season is well underway, fox denning season is still with us, with foxes’ pups and kits often lurking around their dens until they are grown enough to go on their own. While red foxes don’t threaten humans, they are often a nuisance if they have lost their fear of people, or if they are denning near your home. It is wise to seek professional help if you discover or suspect any foxes’ den nearby.

When Is Fox Denning Season?

The red fox breeds from the end of January through the first few weeks of February. Due to this, the females give birth to their annual litter at the end of March or in the first few days of April.

During cold climates, red foxes usually breed from late January to the early weeks of February. As a result, female foxes give birth to their annual litter towards the end of March or the beginning of April. Although, before they start to breed, each pair of red foxes usually builds a den in the weeks before to protect their young ones from the springtime storms that frequently occur. A den also guards these defenseless young ones against predators like coyotes, bears, and different raptors that would attack and kill them.

When the fox litter is born, the pups spend a significant amount of time (several weeks) in and around the den. This is because their development is slow, and they depend on their den’s safety and their parents’ guidance on hunting, finding food, and avoiding danger before they can venture on their own.

Where Do They Den?

When the time for their yearly litter approaches, a pair of the red fox may dig a new den, but most foxes occupy any acceptable den that already exists in their region. The chambers and tunnels of an abandoned woodchuck burrow are occasionally revived for this usage because they are large enough and deep enough for this little canine to use.

Habitats of other foxes or animals are no exception either. Foxes will take residence in previously long vacated dens if the surroundings remain unchanged and there are no possible threats. Foxes also take possession of natural habitats like piles of boulders in your backyard as long as it contains large enough passageways and chambers in which they can live.

During the many weeks, the foxes depend on the den for shelter; they prefer to scavenge or hunt for food in the nearby environs. This can include the dustbins or poultry you may have in your backyard.

How to Locate a Fox Den

It is easy to locate a fox den since these creatures are known to be so destructive when creating them. However, it can be difficult to identify one in a bushy area unless you’re a professional or you know what to look for.

Since foxes mark their territory with urine, you can rely on smell to locate a fox den. If you smell a strong, distinct smell, there could be a fox den nearby. Other tell-tale signs include the smell of feces, food remains, or foot traffic that leads to a tree or bush.

If you are finding a nearby fox to be a nuisance, you can try to get rid of them by filling their den. However, you must do it right to make sure they don’t dig it back up and return.

Have a Fox Problem on Your Property? Give Us a Call Today!

Reach out to our team for assistance if you happen to witness or suspect foxes having taken residence in your backyard or within your area. For more than 25 years, Shumaker’s Animal Control has assisted Maryland residents with humane pest and wildlife removal services.

We can help remedy the situation and restore your home (or yard) to normal. Call us today at (443) 854-8072 to speak to an animal removal specialist in Maryland. You can also fill out the contact form on our website, and a member of our team will get back to you promptly.

Tweet
Share
Pin
Share
0 Shares
Categories: Foxes
This entry was posted on Tuesday, July 26th, 2022 at 7:12 pm . You can follow any responses to this entry through the RSS 2.0 feed. Both comments and pings are currently closed.