What Does the Fox Say? 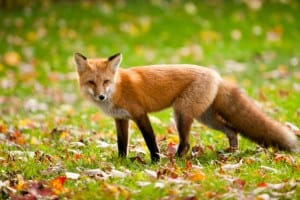 There are four different kinds of foxes in North America.

There are four different species of fox in North America. Although they share many of the same characteristics, each of these foxes has their own distinct differences. Let’s take a look at the red, gray, kit, and arctic foxes roaming around North America.

The smallest of the wild dogs in North America, these animals are extremely smart and can survive in any temperature. Their tail, or brush, is one of the most significant features in surviving during the coldest of winters. A fox can curl up into a ball and cover their nose, paw, and legs with their tail in order to keep warm. It also plays a role in fox language in order to convey dominance, submissiveness, playfulness, and aggression. The tail is a third of the fox’s body length. Although most dogs have round eyes, a fox’s eyes are oval shaped with vertical pupils that can narrow into slits in the bright sun. Like a cat’s eyes, a fox has a reflective membrane that passes over the retina to improve their night vision. Contrary to its name, not all red foxes are red. Some red foxes go through a black phase and the “cross fox” is a red fox with dark fur in the shape of a cross down the back and shoulders. The kit fox is usually found in the desert or plain areas of the U.S. and is yellowish gray in color to blend into its desert surroundings.

With powerful legs, a fox can leap 15 or more feet to capture their prey. Foxes are quick learners and can locate their food from feet away under snow and grass. A fox’s diet is made up of small mammals like mice, moles, rabbits, and squirrels, but they will also eat grasshoppers, crickets, small birds, lizards, and snakes. When able, a fox will even hunt for ducks and pheasants. They can even eat berries and fruits like apples, grapes, and raspberries. Although red foxes hunt like the others of the species, red foxes will often bury food when it is abundant in the summer months then dig it up when food is scarce in the winter. Foxes do not howl like dogs and wolves; they do have a shrill bark of alarm to warn their young of danger. They also have numerous other cries, calls, and sounds they make in different situations. The gray foxes are the fiercest hunters of the species and can even fight off a dog if the need arises. While other species of foxes avoid people, the arctic fox is generally better around people in the hopes of an easy meal.

There are typically four kits born per litter in March or April. Once the kits are born, the dog fox, or male, will rejoin the vixens to help raise their family. After birthing their young, a vixen will remain in the den for several days with the kits. During their first four weeks of life, the kits will have opened their eyes and will have fought for dominance in their hierarchy, which will determine who is fed first by their parents. If food becomes scarce, the dominant kits may be the only ones to survive. At eight weeks, the kits are no longer nursing and at nine weeks, these babies are able to feed themselves in preparation to week 10. After 10 weeks of being in the den, the kits are dispersed into the world. The average life span of a wild fox is five years.

For more information or for help maintaining foxes on your property, call Shumaker’s Animal Control!

If you have any questions about animal removal, contact Shumaker Animal Control by calling (443) 854-8072 or click here today!

Tweet
Share
Pin
Share
0 Shares
Categories: Foxes | Tags: about foxes and foxes
This entry was posted on Wednesday, November 25th, 2015 at 6:42 pm . You can follow any responses to this entry through the RSS 2.0 feed. Both comments and pings are currently closed.