Do Snakes Hibernate in the Winter? 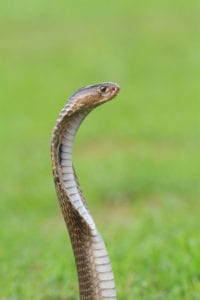 When winter temperatures start dropping, many animals venture outside less and less, opting to conserve body heat for the low temperatures, and snakes are no exception to that idea. However, while many people think that snakes hibernate during the winter, that is actually incorrect. Instead, snakes go through a process called brumation, which is functionally similar to hibernation.

Snakes practice brumation instead of hibernation because they do not actually fall into deep sleep for a long period of time. Instead, they exist in a lethargic, slow state, where they do not move around, but wake up periodically and simply stay awake before resuming their state of slumber.

Like any other animal that hibernates, snakes do this to conserve their body heat in order to survive the cold winter. They slow down their metabolism and their heart rate drops as well, as snakes can go weeks without eating during the quiet winter months. Snakes have to undergo brumation, because none of their prey ventures outside during the cold temperatures, so they go into the state of sleep to avoid dying from lack of food.

Snakes will go into brumation whenever the temperatures start getting too cold for small rodents to go outside as well. This usually occurs between October and November, and the brumation period will last until spring, typically in March or April. Snakes wake up during brumation, often to venture outside for a short period of time and find minimal amounts of water and food, but will typically stay in their sleepy state if possible.

When it comes time for brumation, snakes will try to find a warm or secluded spot to enter their weakened state. Caves, burrows, tree stumps, caverns and deep holes are all popular spots in nature, but nothing can beat the convenience of a heated home or business for a cold, tired snake.

They can sneak into homes through the smallest of openings and find a quiet place to settle down. Once a snake finds a suitable spot for brumation, they will remember it and try to return back after simple food excursions or even a year later when they need to do the same thing over again. While snakes are mostly docile during this period, they can still cause damage to a home, as they are not asleep the whole time.

If you happen to come across a snake in your home, call the experts at Shumaker Animal Control to deal with the problem safely and effectively.

At Shumaker Animal Control, we are a family-owned business who cares about the safety of you and your family but also about the well-being of the animals themselves. All of our trapping and control methods are humane, as we never try to hurt the angry or scared animal. Once trapped and safely removed from your property, all snakes are relocated far away to an approved wildlife management area.

Tweet
Share
Pin
Share1
1 Shares
Categories: Snakes
This entry was posted on Thursday, November 15th, 2018 at 7:27 pm . You can follow any responses to this entry through the RSS 2.0 feed. Both comments and pings are currently closed.