Why You Should Never Release Your Goldfish 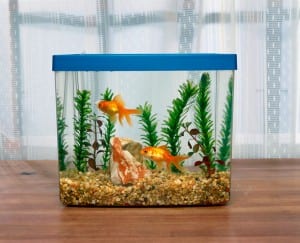 Without a filter, goldfish run the risk of making their living spaces filthy.

Fish are a popular pet in America, and it’s even more popular to abuse them.  Fish are actually the most abused pet by a long shot–this is because a lot of fish owners have no idea how to properly care for them.  For instance, that pretty betta fish you have in that flower vase requires at least 5 gallons of water, a heater and a filter.  Requires.  It’s not a luxury.  Goldfish need about the same level of attention; they need bubblers, strong filters, frequent tank cleanings and water changes, and are overall just a really intensive pet.  And yet, Americans buy them all the time for their children because they are under the impression fish are “easy” pets.  This leads to fish being released into local ponds and rivers.  Read on to find out why you should never do that.

They don’t belong there.

Goldfish are from Asia–and we imported them as pets a few decades ago, much like we do with other tropical fish that aren’t available in the States.  Tropical fish usually come from South America, and saltwater fish are captured off coral reefs and farmed (yes, like in Finding Nemo).  Keeping goldfish in a well-supplied tank or a maintained pond is one thing; this doesn’t harm the environment, and you aren’t introducing invasive species to any ecosystems.  However, releasing them (or flushing them while alive) allows them to grow, multiply, eat smaller fish, and destroy ecosystems.

See, goldfish are said to make good starter fish because they’re hardy, which means they can easily survive in sub-par conditions.  That’s why you’re reading this and getting really defensive about Goldy you kept in a bowl when you were seven.  Goldfish are also dirty; they often carry nasty parasites and diseases that don’t harm them, but can kill other fish.  When you buy new fish for your aquarium, you’re supposed to quarantine them for at least two weeks to make sure they survive and don’t pass anything to your current fish.  This doesn’t take place when you dump Goldy into your local pond.  Instead, he’s going to adapt quickly and grow bigger than any other fish in the pond.  It’s normal for goldfish to grow unrestrained when they have wide, open waters to live in.  It can quickly cause problems.  Bottom line?  If you can’t care for a fish anymore, humanely killing it (freezing it is a good way, as they will simply slowly fall asleep) is your best option.

Do you need animal control in Maryland?  Shumaker’s Animal Control can help.

Tweet
Share
Pin
Share
0 Shares
Categories: Animal Removal, blog, and Uncategorized | Tags: goldfish and invasive species
This entry was posted on Friday, July 22nd, 2016 at 4:21 pm . You can follow any responses to this entry through the RSS 2.0 feed. Both comments and pings are currently closed.