There are two types of foxes that are commonly found in Maryland: the red fox and the gray fox. These small creatures pose little threat to humans, but can be extremely dangerous when it comes to other animals.

Both red and gray foxes resemble small dogs and can weigh up to 15 pounds, resulting in no cause for alarm for humans.

They are skittish and shy creatures, which means they will generally try to avoid people at all costs. If you do come into contact with a fox, they are likely to run away as soon as they notice you. 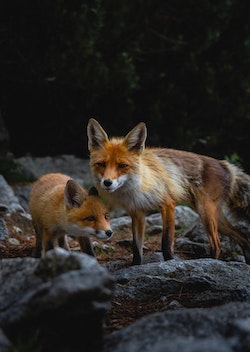 One of the only times that foxes are considered dangerous to humans is when they are rabid. When rabid, foxes will exhibit signs of aggression, disorientation, and other abnormal behaviors.

Foxes can also pose a threat to humans if they feel trapped or scared. If you encounter a fox, the best thing to do is simply leave it alone. If the fox attempts to approach you, scare it away by making loud noises or throwing small objects at them.

Due to their similar size and proclivity for self-defense, foxes and cats generally do not have any problems. Kittens, on the other hand, can not protect themselves from foxes. To prevent your cats from falling prey to foxes, and other environmental hazards, keep them inside as much as possible.

Similar to cats, small dogs are at a greater risk, while bigger dogs are at a lower risk of harm from foxes. However, all dogs should be closely watched when outside to avoid any unwanted interactions with foxes. These encounters can be dangerous, especially if the dog tries to attack the animal or their children – a fox will go to great lengths to protect their young.

Foxes are known to prey on small animals and livestock, including chickens, rabbits, guinea pigs, lambs, and pigs.

Fences are also effective when dealing with foxes. These small creatures can easily dig underneath regular fences, so be sure to install the fence at least 6 inches underground or invest in an L-shaped fence.

Have A Fox Problem? Call the Experts at Shumaker Animal Control

If you think you have a fox problem on your property, call the experts at Shumaker Animal Control to deal with the problem for you. Our experienced team will take care of the problem in a timely manner, ensuring that your home and pets are not in any danger.

Tweet
Share
Pin
Share
0 Shares
Categories: blog and Foxes
This entry was posted on Thursday, December 24th, 2020 at 5:27 am . You can follow any responses to this entry through the RSS 2.0 feed. Both comments and pings are currently closed.