Fun Facts About Owls in Maryland

Did you know there are eight different species of owls that can be found in Maryland? Barred owls, Eastern Screech owls, and Great Horned Owls are the most common and can be found year-round. Species like Northern Saw-whet owls, Burrowing owls, Snowy owls, Long-Eared owls, and Short-Eared owls are more rare due to their migratory nature. 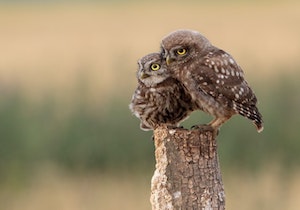 Regardless of how common or rare the species are, there is one thing all owls have in common: owls are secretive and elusive creatures. The chances of hearing an owl are much higher than the chances of actually seeing an owl. Nevertheless it is always a good idea to be familiar with these mysterious creatures in case you are lucky enough to come across one.

Owls are most active at night, which means they have adapted several skills to help them hunt their prey in the dark.

Owls have large eyes, complete with light sensitivity, binocular vision, and excellent depth perception. However, they are unable to move their eyes, so as a result, they have developed a flexible neck that allows them to turn their head 270 degrees.

In addition to sight, the owl also has extremely sensitive hearing. This allows them to detect even the faintest sound, as well as determine the direction and distance it came from.

Once they have identified or located their prey, owls are able to silently fly to sneak up on the animal. The feathers on their wings are soft and wavy, which help to muffle the sounds while flying.

The owl is most commonly known for their infamous “Hoot” sounds, so it might come as a shock to learn that not all owl species make this sound. The hooting sound can be heard for several miles, allowing them to claim their territory. On the other hand, mated pairs also use a special type of hoot to communicate with one another.

These creatures also make a variety of other sounds, including screeches, barks, growls, and shrieks. They will normally make these sounds to signal the presence of a predator, when they feel scared or threatened, or to deter other animals.

Rather than building their own nests, a majority of them use the nests of hawks and crows. They have also been known to nest in hollow trees, bird houses, underground burrows, or on mounds of grass.

Given the color of their feathers, owls can easily camouflage in their environment to keep themselves safe when roosting during the day.

Have A Wild Animal Problem? Call the Experts at Shumaker Animal Control

If you think you have a wild animal problem on your property, call the experts at Shumaker Animal Control to deal with the problem for you. Our experienced team will take care of the problem in a timely manner, ensuring that your home and pets are not in any danger.

Tweet
Share
Pin
Share
0 Shares
Categories: blog
This entry was posted on Thursday, February 11th, 2021 at 1:52 pm . You can follow any responses to this entry through the RSS 2.0 feed. Both comments and pings are currently closed.