No offense to opossums, but they aren’t exactly anyone’s favorite animals. While they also aren’t a disliked animal either, opossums aren’t very well known or commonly seen in most places, often due to their nocturnal hours.

While opossums are more likely to run away or play dead than interact with humans, there are a few fun facts about opossums which might make them seem more interesting.

Possums and Opossums Are Different Animals 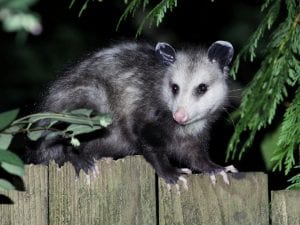 Opossums are found in North America, while possums are Australian creatures which are much bigger (32 pounds) than most opossums (11 pounds).

They Don’t Choose to Play Dead

Everyone knows that when threatened by a bigger animal or human, opossums don’t have big claws or teeth to defend themselves.

Instead, they often play dead and stay motionless for extended periods of time, also secreting a disgusting odor to give the appearance of being dead.

But while the strategy is fairly effective, opossums actually have no control over when they play dead. Instead, it is an involuntary and automatic response to danger which brings them to play dead.

Despite being a semi-dirty animal which might seems as though it carries many diseases, (they do carry some) opossums do not spread rabies.

With a lower body temperature than most animals which spread the disease like squirrels or rats, opossums don’t incubate the disease and thus, don’t spread it along.

They Have Prehensile Tails

If that sounds scientific, don’t worry. Simply think about the types of tails monkeys have which allow them to hang from tree branches like a fifth arm or leg of sorts.

While opossums more often use their tails to carry items, they can hang from a tree for a short period of time. But not for too long, as their tails are relatively weak for that purpose.

Although they usually seek out food on their own, opossums are actually social creatures and often live in communities together. Sometimes up to a dozen opossums can live together, and they do venture out to find food in groups if needed.

If you think you have an opossum problem on your property, call the experts at Shumaker Animal Control to deal with the problem for you.

Tweet
Share
Pin28
Share1
29 Shares
Categories: Opossums
This entry was posted on Wednesday, April 24th, 2019 at 6:25 pm . You can follow any responses to this entry through the RSS 2.0 feed. Both comments and pings are currently closed.