Are Raccoons Dangerous to Humans and Animals?

Most people don’t see very much of raccoons. The animals are nocturnal and only emerge after sunset and into the dead of the night to find food. More of a scavenger than a predator, the worst experience most people have with raccoons is simply finding their trash can overturned in the morning, their garbage bag spilled or their bowl of pet food eaten. But are raccoons dangerous to either humans or animals?

For humans, the answer is pretty much no. Raccoons are fairly smart animals and are capable of understanding their small stature is much less intimidating than that of a large, 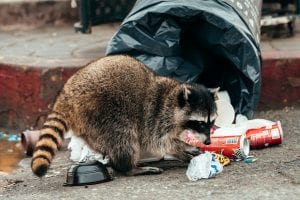 The most common interactions between people and raccoons comprise of scaring them away with a broom and seeing their striped tails retreating back into the woods, sewers or bushes.

For the most part, raccoons will run away or at the very least refuse to move forward or attack.

The presence of raccoons poses a much different and very real threat to the safety of other animals, though. When searching for food options, raccoons will only attack the  weakest, easiest targets such as small rabbits or young chickens.

Animals like cats are also wise enough to identify the presence of a raccoon and avoid the area, since no good can come out of an interaction with a hungry raccoon. Although very young cats might be at a greater risk, cats are generally safe from raccoons.

However, raccoons can run into issues with dogs which pose safety issues. Raccoons are attracted to the smell of food, whether it be human or pet food, and often venture into dog’s territory to eat their pet food if it’s left out.

Dog owners understand how territorial dogs can be over their food, and add in the fact that dogs may even chase a fleeing raccoon and you have the recipe for a nasty, ugly fight.

Raccoons don’t have as many tools as a dog in a fight, so they choose to play dirty. They use their claws to try and gogue eyes and will also bite and slash at any animal which threatens their safety.

Moreover, raccoons don’t stop simply when the threat is lessened, as they will continue to attack a potential threat until it is fully incapacitated, sometimes to the point of death in extreme cases.

If you think you have a raccoon problem on your property, call the experts at Shumaker Animal Control to deal with the problem for you.

Tweet
Share
Pin1
Share1
2 Shares
Categories: Raccoons
This entry was posted on Wednesday, May 1st, 2019 at 6:33 pm . You can follow any responses to this entry through the RSS 2.0 feed. Both comments and pings are currently closed.